For some students, the primary difficulty isn’t the flight, but obtaining a visa.

Students from around the world are eager to study at U.S. colleges in the upcoming fall semester after the Covid-19 pandemic confined many of them to their home countries and left some attending virtual classes in the wee hours of the morning.

Now, getting to campus is the hard part.

In China, which accounts for a third of the roughly 1 million foreign students that flock to the U.S. in a typical academic year, the decline in available flights to American cities has been so severe that some students and their parents have resorted to lining up charter planes. Others, including from India, are caught up in visa purgatory because the State Department reduced personnel at embassies and consulates due to the pandemic. And that’s to say nothing of fast-changing Covid-19 vaccine guidelines.

It all adds up to tangle of challenges that has created uncertainty for students and a potential headache for schools that are looking to blunt last year’s sharp drop in international enrollment and the attending financial hit.

Ohio State University, which drew almost 6,600 international students to its Columbus campus in the fall of 2019, has already begun to see requests to defer for the term that begins Aug. 24, said Carina Hansen, who directs the International Students and Scholars program.

International students bring a worldly perspective to campuses and, crucially, often pay full tuition. Widespread deferrals would be a blow to colleges and universities, which dealt with a 16% decline in international student enrollment in this year’s spring term from the previous year because of the pandemic.

“If they defer for the semester, there’s always the concern that you’ll lose them for good,” said Don Heller, vice president of operations at the University of San Francisco who studies higher education finance. “If it’s easier for them to get into Canada, they might decide to go to a university in Canada instead, or stay in their home country.”

Anticipating potential problems with travel and other factors, Northeastern University in Boston held more than 200 virtual support sessions – in a half dozen languages, across multiple time zones – to answer questions about vaccines, visas and requests for travel support letters for airlines, said Renata Nyul, a spokeswoman.

Chinese students are finding the airline industry’s fitful recovery from the pandemic is making the trip to the U.S. trickier to plan, with a 96% decline in seats from two years ago. In July, there are 61 flights, or 20,254 seats, going from China to the U.S., according to Cirium, an aviation data company. That is far lower than the 1,626 flights, or 479,519, seats, making that voyage in July 2019.

Flights from China may come with an eye-popping price tag, too: The average cost of a round-trip ticket from that country to the U.S. was $2,260 in the first two quarters of 2021, according to travel-management company TripActions, a big jump from the $1,247 average fare seen in the same period in 2019. 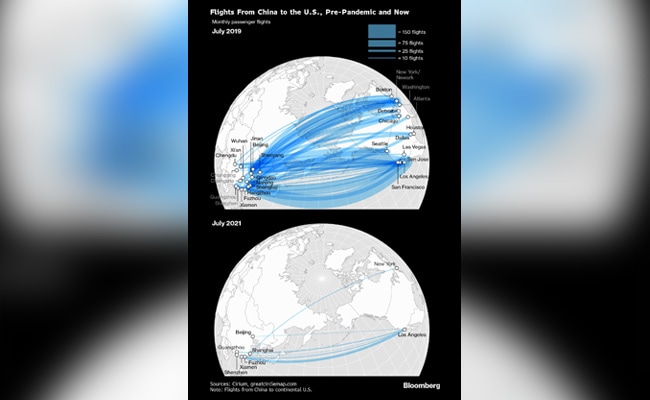 Alicia Zhang, 20, took a gamble by buying a ticket for a direct flight in late June from her hometown, Shanghai, to New York, where she’s a rising junior studying economics at New York University. The price — about $4,000 for a one-way ticket — was roughly five times greater than what she had paid in pre-pandemic times. It didn’t pay off: She said the China Eastern Airlines flight was canceled less than a month later, with a refund. She then purchased a seat on another flight, with a layover in Hong Kong, for about $4,500. She said many students fear that the course of the pandemic this summer could prompt airlines to reconsider their schedules, potentially leading to cancellations or changes.

“The biggest problem will be the ticket,” Zhang said. “Most of my friends will buy several tickets and just wait for which ticket is not canceled, and just go to that flight.”

See also  Tokyo Olympics: World No.1 Ashleigh Barty Crashes Out In First Round

After trading stories of pricey airfares or worries about flight cancellations in WeChat groups organized by the Chinese Students and Scholars Association, some students and their parents lined up charter flights with Cathay Pacific, including two flights to New York in August. The group helps Chinese students studying abroad, especially in the U.S.

“We don’t have many choices,” said Samantha Duan, 18, an incoming NYU student from Chengdu who is traveling to the U.S. for the first time on one of the charter flights. This option offers some certainty, a more attractive price, and the fun of traveling with other students.

For those that don’t opt for charter flights, the ever-changing circumstances of the pandemic make it hard to game out when fares might be most affordable.

“An uptick in ticket prices should indeed be expected given airlines will be looking to tap the surge in demand from students over the short August/September window,” said Chris Muckensturm, a Bloomberg Intelligence analyst who studies passenger transportation in the Asia Pacific region, in an e-mail. “Yet more capacity deployed on those routes could mitigate price increases.”

For some students, the primary difficulty isn’t the flight, but obtaining a visa. According to a State Department website that offers guidance on appointment wait times, the situation varies widely across the globe. For those looking to obtain student and exchange visas, estimates range from three calendar days in Beijing and 36 days in Seoul to emergency appointments only in Shanghai, Mumbai and London. The State Department says it is prioritizing visa applications for certain types of travelers, including students and exchange visitors.

Sara Dahiya, 17, an incoming freshman at Harvard University from Panipat is among the students awaiting her visa. She expects to depart for the U.S. this fall alongside her twin brother, Anirudh, who will begin at the University of Wisconsin-Madison. She and her brother purchased their plane tickets in mid-June.

“It definitely was a risk to book my flight before getting a visa but I’m glad I took it,” Dahiya wrote in an email. “The process of scheduling a visa appointment, as it is, was extremely distressing, and finding and paying twice the amount for a flight right now would’ve only added to the troubles.”

Colleges have ample incentive to move away from remote learning this fall. Beyond the potential educational rewards of in-person schooling, there are financial benefits to these institutions, because payments for living in dormitory housing and eating in dining halls help cushion their bottom lines.

International students studying at U.S. colleges and universities contributed $38.7 billion to the nation’s economy and supported 415,996 jobs during the 2019-2020 academic year, according to an analysis by NAFSA: Association of International Educators. Last year, when campuses shut down in March, many students were stranded far from home. If they did eventually depart the U.S., they might have ended up taking classes online at odd hours, thanks to time-zone differences.

Paulash Chatterjee, a rising senior at the University of Illinois-Chicago, has attended school from his home in Jaipur since last August, located 7,500 miles away from campus in a time zone that is 10.5 hours ahead.

He plans to resume in-person learning in the fall, but is concerned about the cost of airfare and the possibility that his flight might end up canceled. He also must consider Covid-19 vaccine recommendations. He received his first dose of the Indian vaccine Covishield in June, but evolving government advice now suggests that a later administration of his second vaccine dose — up to 16 weeks after the first — would offer better protection. That’s long after Chatterjee is set to be in the U.S.

“I’ve been checking flights every day,” said Chatterjee, 21, who is studying biology. “Of course I want to go back to Chicago, but at the same time, I don’t want to risk my life.”

–With assistance from Mary Schlangenstein, Dave Merrill and Nick Wadhams.

This Bronx Zoo Guess Game About Insects Is Absolute Fun

Sawan 2021: These Delicious Falhari Pakodas Will Fulfill Your Hunger In No Time

“Dizzy” Lewis Hamilton May Be Suffering “Lingering Effects” Of COVID-19