Actress Dia Mirza found a spot on the trends’ list, following her recent Instagram story about her ex-husband Sahil Sangha. On Friday, Sahil Sangha turned a year older and Dia Mirza dedicated a birthday wish to him in the form of an Instagram story. Sharing a photo of Sahil Sangha from what appears to be a safari, Dia Mirza wished him with a simple message: “Happy Birthday, Sa,” she wrote. Dia Mirza and Sahil Sangha parted ways in 2019 after 11 years of togetherness. In February this year, Dia Mirza got married to Vaibhav Rekhi in a close-knit ceremony, attended only by friends and family – the couple welcomed their first child, a baby son, in May.

Here’s how Dia Mirza wished Sahil Sangha on his birthday. 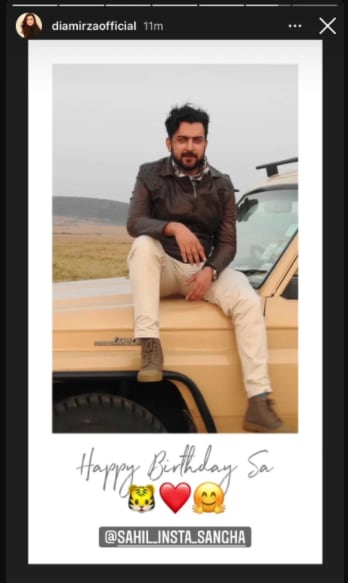 In 2019, Dia Mirza had marked Sahil Sangha’s birthday with a post, describing him as the “precious one.” Just days after this post, Dia and Sahil announced their separation in a statement, saying: “After 11 years of sharing our lives and being together, we have mutually decided to separate. We remain friends and will continue to be there for each other with love and respect. While our journeys may lead us down different paths, we are forever grateful for the bond that we share with each other.”

Meanwhile, Dia Mirza and Sahil Sangha are now parents to a baby boy, who they have named Avyaan Azaad. Earlier, Dia Mirza had revealed she realized she was pregnant during the months leading up to her wedding to Vaibhav Rekhi:

Dia Mirza, a former beauty queen, is best known for starring in films such as Rehnaa Hai Tere Dil Mein, Sanju, Dum, Dus and My Brother… Nikhil, among others. She was last seen in the 2020 film Thappad. Dia Mirza is also a United Nations Sustainability Development Goals Advocate.

Ana Carrasco broke her back after a ‘stupid’ crash. Eight months later she raced to victory

Canada Covid-19: Military will help out in the province of Ontario as the Covid-19 positivity rate hits an all-time high

Why can’t we find the mysterious ‘magnetic monopole’?