How to get villagers in Minecraft Skyblock

Skyblock is one of Minecraft’s most intense and addictive map types, pitting players in a low-resource scenario in which they need to use every material to their advantage in order to survive.

Villagers are one of the most crucial components to a Minecraft player’s progression within Skyblock. Without them, players have no access to Emeralds, and therefore no access to items like diamond gear and enchantment books, which are only available through villager trades on many Skyblock maps. Fortunately, there are ways to rack up a respectable stable of villagers. It is a time-consuming pursuit, but definitely one worth undertaking to improve a player’s Skyblock experience.

When it comes to getting villagers on most of Minecraft’s Skyblock maps, players will need to cure zombie villagers of their affliction. This is achieved by giving the zombie villagers the Weakness status effect and then feeding them a golden apple, which will cure them of their zombie sickness and return them to their original form. This can be done in a few different ways, but all methods take a considerable amount of effort to pull off. 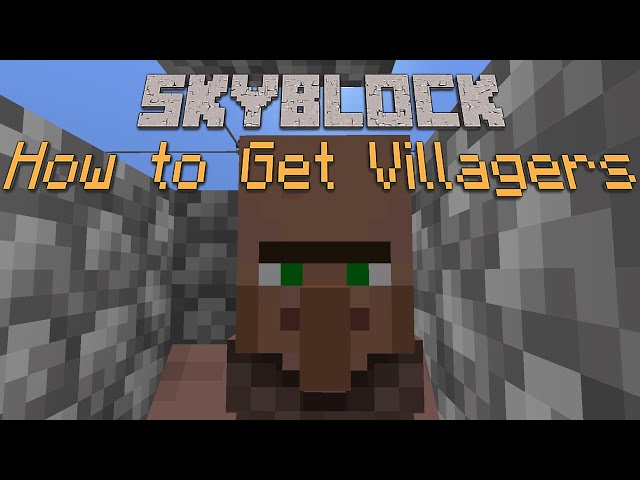 One of the main ways to cure zombie villagers is by having a witch throw a Splash Potion of Weakness on them before feeding them the golden apple. By damaging a witch enough to reduce its heart total to below eight, players will trigger a 25% chance that witches will throw the necessary splash potions out of desperation. Both finding a witch and lining its throw up to hit a zombie villager instead of the player can be difficult, but creating a player’s own Splash Potion of Weakness will require access to the Nether in order to craft a brewing stand. Additionally, players would likely need to rely on the Wandering Trader in order to obtain the necessary brewing components to make the potion, notably a brown mushroom. Combined with a fermented spider eye and some gunpowder, Minecraft players can feasibly craft their desired splash potion with the brewing stand.

Golden apples are also tricky to get a hold of. Apples are easily obtainable in the Overworld, but gold is not as readily accessible. Some ways to get the necessary golden ingots to create golden apples include:

Whichever method Minecraft players pick can be tough, but the reward is well worth it. It is highly recommended that once players have enough villagers, they begin breeding them as soon as possible so they won’t need to rely on curing zombie villagers in the future.

Read More: Where to use Emeralds in Minecraft Dungeons

IPL 2021: “Hasaranga, Chameera’s skill sets will be of huge help”

Jose Abreu is a Metronome of Power for the White Sox